Tokyo Pop Lab | At The Crossroads of Ideas

The proposed facility is not a classical building, but a spatial structure, three-dimensional representation of history and development of popular culture. It is the materialization of the world of ideas placed into the real world; a statue telling the story …

The proposed facility is not a classical building, but a spatial structure, three-dimensional representation of history and development of popular culture. It is the materialization of the world of ideas placed into the real world; a statue telling the story of pop culture over time.

The building consists of three parts differently shaped by a different concept of formation of space: the aboveground part of exposition, the underground part of the educational spaces and facilities, and a parterre between them.

All these parts are from the lowest to the highest levels interconnected by cylindrical concrete towers. These towers are the basic structural element: everything in the building connects to them in a certain sense. Into their midst they are placed vertical transitions and also serve as the main supporting pillars of the building.

The above-ground part, where the exposition is situated, the cluster boxes-containers are floating above the parterre. Each box is representing one category of pop culture. These boxes are fixed in space by superstructures lattice of steel beams cross plotted by concrete towers. Boxes have no floors or ceilings, to allow for vertical vistas, and are interwoven walkways allowing visitors into their hidden contents.
Exposition above ground is protected against the weather with a transparent facade and roof cladding of glass, which is further along its periphery wrapped in translucent bodywork perforated sheet.

Parterre is the most relaxed and transparent and natural extension of the public space around the building. It is not divided by partitions, and creates a single large horizontal area connected by the two atriums cylindrical towers with underground sections. Both of these atriums can be entered via separate staircases. In addition to a lobby with reception there is located a cafeteria and a library with a reading room. The floor of the pit forms a transparent steel grate. So here they are enabled not only views of the exhibition above ground, but also into the spaces underground.

Parterre is a semi-public place, overlapping the surrounding city to the interior of the building. It is a place between production and parts of pop art. Down here we can either create and learn, or look up to admire the work created.

The underground contains regularly spaced two-story boxes with education and technical spaces of various heights. The main connection axis is the passage between the atriums. Along the axis there are situated the main lounges like stepped forum, conference rooms and open design studio. Aside they are placed service rooms, offices or warehouses. In the corners of plan, behind the atriums, there are situated lavatories.

The building is in the vertical direction more porous and more transparent than traditional houses. Due to the absence of floors aboveground replaced by the system of walkways and perforated surfaces of the ground floor it can be enjoyed simultaneously height and depth of created space. Even from the adjacent sidewalk it can be clearly visible the contrast between the part of a fantasy world of ideas materialized in aboveground exposition and to an underground filled with dynamic creative work. Parterre sandwiched between them is a neutral semi-public space, through which penetrates inside the building the everyday life of the city around. It is a place exactly halfway between the creative process and its results. From here it is possible to descend and plunge into creative work, or climb up and learn from the pop art works.

Exposition is designed as a comic, like spatial manga, popular way of telling the story of pop culture. This comic book comes in four parts, each of which describes one stage of time period. Each of the parts is narrated in a stand-alone time level. The lowest shows the roots, in the top are shown contemporary pop culture developments. The fifth level is not finished, it’s being formed. It is present, rooftop landscape, views of the vibrant Tokyo.

All the levels of exposure penetrate vertical rectangular spaces of various directions of pop culture. Vertical is their timeline, according to which it is narrated developments in every direction. The works are organized chronologically in them: the lowest position is initial works of pop culture; the highest is the current work. Throughout each site there are footbridges at different levels. From each direction footbridge is seen from a different angle, a different temporal context. This allows understanding the continuous development of the direction and the situation of each time period. From our level, we see the works of the time, below those that affected it, above those which had an impact on.

Like the comic side of the space is divided into individual images. Footbridge through them determines how they go in order. Several large boxes with varying views evoke experience on the border of manga and video clip. White spaces boxes contrast with the colorful narrow corridors between them. Continual development of each direction, expressed by a vertical space is always replaced by a corridor, facilitating a return to reality of given period of time, understanding the context of art creation. Removing the classical exhibition space and replacing floors by narrow footbridge minimizes the number of people in the space and allows more individual experience of each artwork.

Thus, the spatial structure of created manga is divided by two tall narrow staircase spaces into four parts. This creates a cross extending from the roof to the ground floor. There are two spaces entering overhead staircase and provide insights into the higher areas. In each level serves spinal axis for easier orientation and exposure to its breakdown.
The spatial resolution allows exposure to a unique, comprehensive understanding of a given period of time and direction.

Culture laboratory in Tokyo aims to become the meet point of not only artists and students, but also enthusiasts and fans of pop culture, become the beating heart of the world of popular culture situated right in the middle of one of the world’s metropolis of pop.
Unusual shape and arrangement of the building aims to attract visitors, draw them into an entertaining exhibition and pull them into the game. Pop Lab wants to stimulate the imagination of visitors through experience of seemingly randomly arranged spaces. The analogy with brightly colored felt tips in a transparent bag on the children’s desk or similarity with the colorful children’s building blocks is therefore in no way accidental. 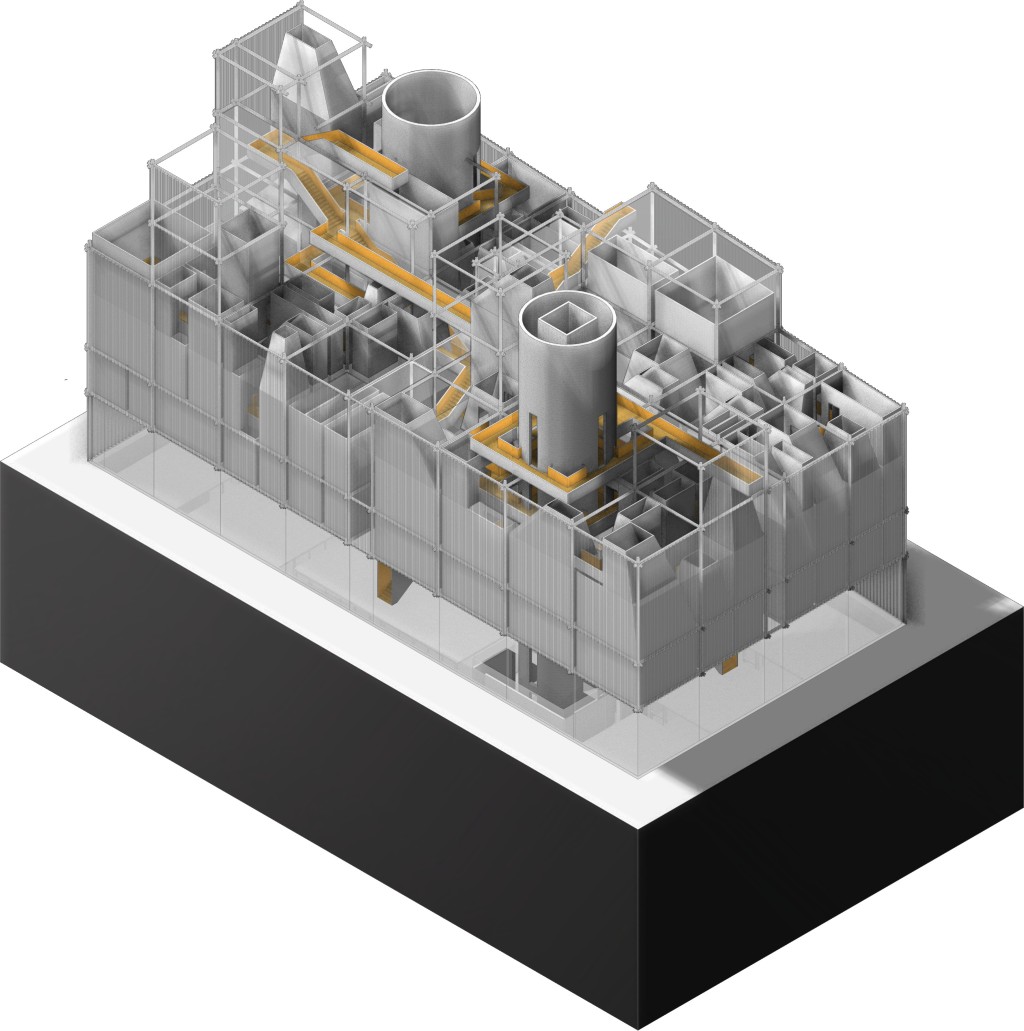 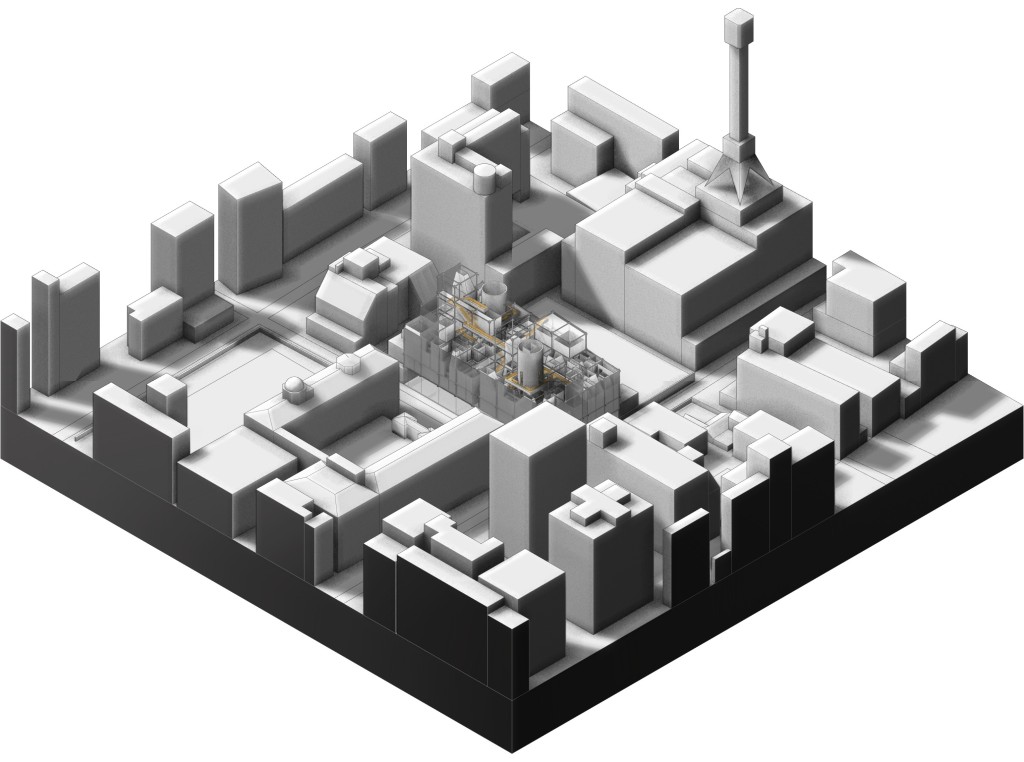 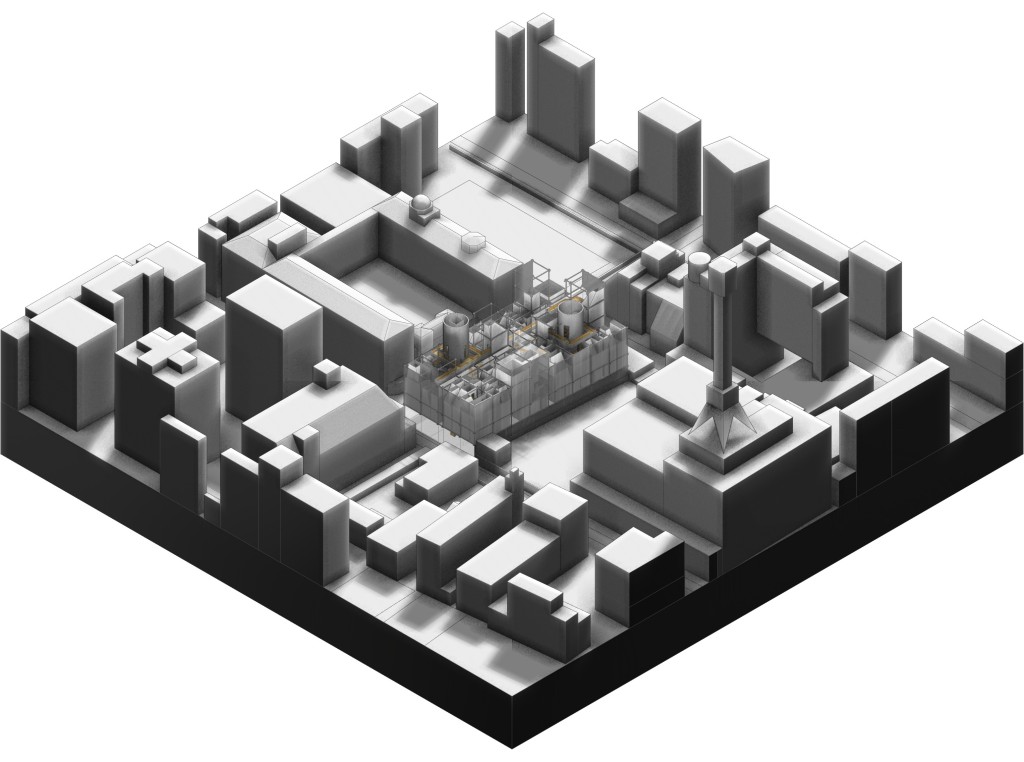 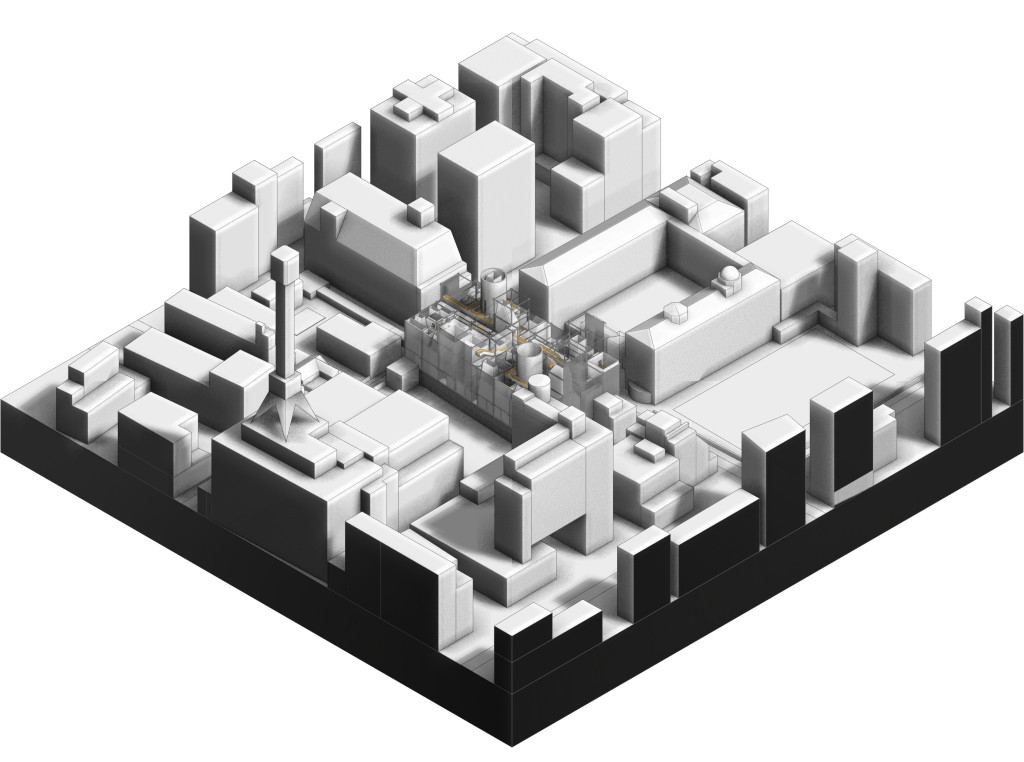 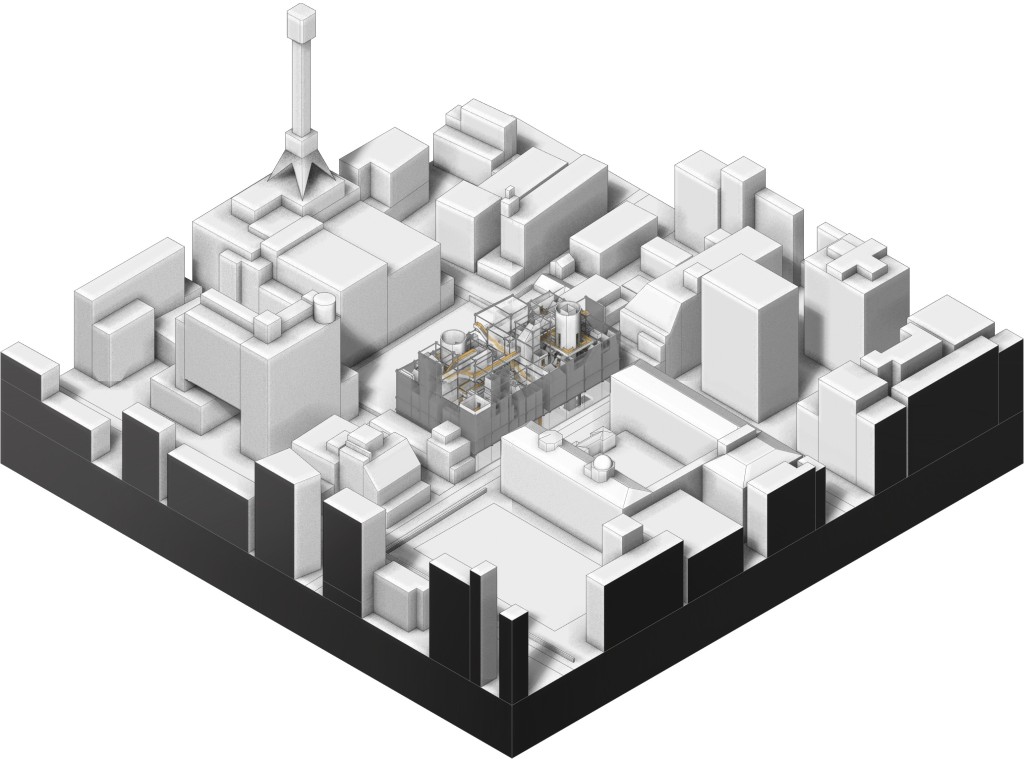